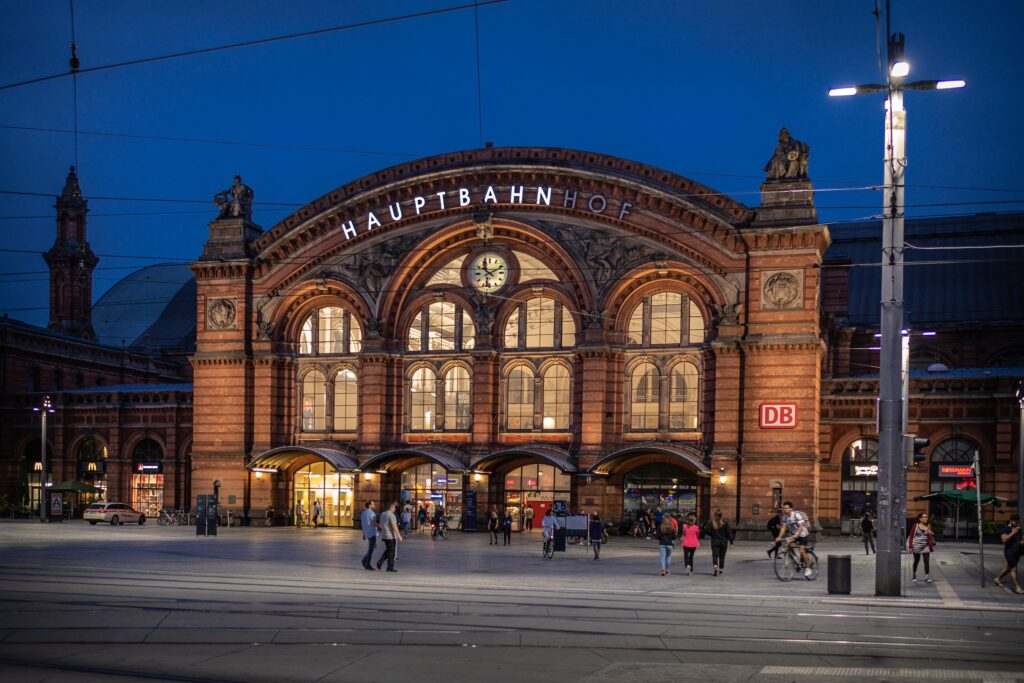 Our location at Bahnhofsplatz is perfect if you arrive by train, as only a few meters separate you from us.

By car is also very good. This way of travel is recommended especially if you are planning trips to the surrounding area.

At the same time, there are also car rental stations that you can fall back on if you have left your vehicle at home. Bremen is surrounded by a network of highways, which makes it easy to get there. Coming from the north and south, for example, use the A1 or the A7. If you are coming from the Berlin region, the combination of A2, A7 and A27 is recommended.

Regular flight connections bring you directly to the international airport of Bremen. Alternatives are e.g. Hamburg or Hanover. From there you can reach us by train or rental car.
Have a good trip – we look forward to seeing you!

“Moin” and “Servus” in the Bavarian hotel and restaurant Edel Weiss!

Such a welcome could be waiting for you if you want to spend your pleasure time with us. Our house is located in the center of Bremen and opposite the main station.

Following are a few tourist information:

Spend a wonderful time in the Hanseatic city of Bremen

The 4-star Hotel Edel Weiß is conveniently located between the old town and the train station and thus offers you an optimal starting point for all kinds of activities. On the market square you will find the famous town hall and the Roland statue, which are UNESCO World Heritage Sites. Right next to the town hall you will also find the famous Bremen Town Musicians. Surrounded by the town hall, cathedral and parliament, the market square forms the central hub of the city and is one of the most beautiful public squares in Europe. Not far from the market square, the Weser promenade “Schlachte” invites you to stroll and linger. The famous Schnoorviertel gives you an insight into the living conditions of bygone times. Nature lovers should pay a visit to the Botanika and the various parks.

The old town of the Free Hanseatic City of Bremen is also just a short walk away. There, historical sights, magnificent buildings and the city’s landmarks await you: “Roland, the giant, at the Bremen City Hall” welcomes you as well as the “fairytale Bremen Town Musicians”.

Stroll through the streets and discover the fascination that led UNESCO to include, for example, the Town Hall and the Roland statue in front of it in the World Heritage List. Visit the sacred buildings, such as the Bremen Cathedral or the Church of Our Lady, built in 1229.

Experience the Schnoor quarter, probably the oldest settlement core of the city. Narrow corridors characterize the idyllic quarter. Many houses still date from the 17th and 18th centuries and present themselves as reminiscences of times long past.

Stroll along the Schlachte, Bremen’s promenade. Visit the Teerhof and the Weserburg Museum and enjoy the view of the water.

Of course, you could spend many weeks in Bremen alone discovering every detail of this beautiful city. However, if you enjoy your vacation with us, you will find yourself in the multifaceted center of leisure opportunities. It hardly matters whether you arrive by car or train, whether you like to hike or discover the surroundings by bike.

The surrounding area also has a lot to offer.

A bike tour to the artists’ village Worpswede, a trip to Bremerhaven, a boat trip on the North Sea or a ride on a peat barge are just a few possibilities. You can relax in one of the numerous lakes such as the Stadtwaldsee, the Grambker See or the Holler See, which is located near the hotel.

If you cycle through Bremen, for example, you will quickly notice the beautiful parks, which include Bürgerpark, Oberneulander Parks, Achterdiekpark and Rhododendron Park. East of the Weser Stadium, the Pauliner Marsch stretches over 54 hectares. To the north lies the enchanting nature park surrounding the impressive Schönebeck Castle. In the valley of the Schönebecker Aue, it extends over about 30 hectares and tempts visitors with picturesque paths for a “slow walk”.

If you are a cycling fan, you will certainly enjoy the dense and at the same time extensive network of cycling paths that surrounds Bremen. For example, you could explore the area of the Teufelsmoor on the cycle circuit Weites Land.

Or you may decide to cycle on the Wümme Cycle Path from Bremen to the Lüneburg Heath. Other interesting cycling routes include the Geest Cycle Path, the Brückenradweg (Bridge Cycle Path) or individual stages on the Mönchsweg (Monk’s Path), which leads from Bremen via Fehmarn even as far as Denmark.

You can also reach many interesting destinations by car around Bremen. Do you love sightseeing? Then how about a tour to Oldenburg, Hamburg or Bremerhaven? You would like to spend a day at the North Sea? By car you can reach the East Frisian Norden in about two hours.

If you are lacking inspiration on a day, we are happy to provide you with tips on nice events, exhibitions and other events in and around Bremen. Just contact us: The team of the Hotel and Restaurant Edel Weiss wants you to feel completely comfortable day after day.

Shooting of Kabel 1 in the Edel Weiss! 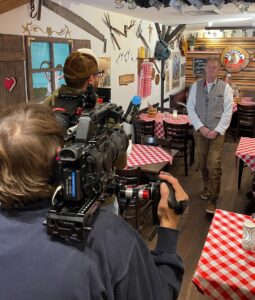 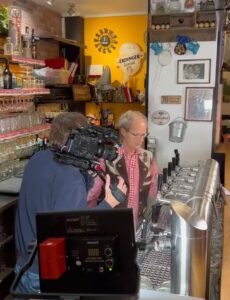 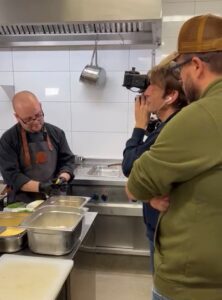 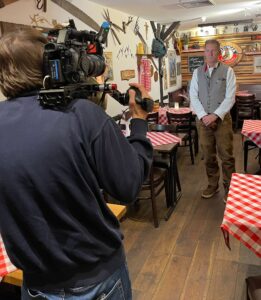 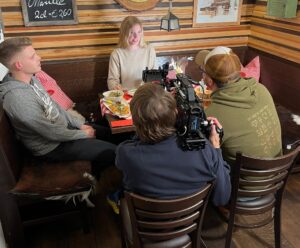 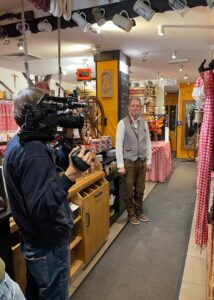 Our next events & happenings:

The 10th anniversary on 18 and 19.09. 2020 was cancelled due to the Corona crisis. We will celebrate it in the restaurant as soon as the situation allows it again.

Currently we are only open 5 days a week. Every Sunday and Monday we have a day off. Due to a lack of staff, we will not be able to maintain opening hours during this period.

Anyone who watched the TV show “Mein Lokal, dein Lokal” (My restaurant, your restaurant) could sympathize with us: In the restaurant duel, it was all about convincing the other restaurant owners across the board.

In the end, we proved that the high quality of our products, the extreme delicacy in the preparation, the friendliness and also the lovingly rustic ambience deserved the 1st place in this competition. Therefore, today we are happy to invite you with a smile and say:

“Join us – at the top, where the edelweiss blooms!”